OIL collapse could be connected to US-China trade war?

Oil collapses 34% in 1 month and 19 days. They are not common movements but the crude used to have sometimes this huge movements and rarely recovers from them. In 2007 and 2014 the barrel drop 54% and 64% and only partially recovers from those falls.

In 2007 we knew the financial collapse started. In 2014, summer time, China`s market started collapsing, yuan was devaluated and there was some US bonds selling from China (maybe to sustain the turmoil that was in August 2015)

From October to nowadays falls, means someone big is moving lot of money. And my concerns are if  the same counterparty (China) is doing the same movement as he did in 2015.

It can be that the economy is slowing down, but this speedy movements cannot be caused because normal markets participants change of mind. Some big whale did a movement for some reason weeks before the US-China meeting the 30th September

¿Is China selling bonds again (getting armed), to make public finally the war the 30th November meeting?.
No comments:

Has been a while since I did not updated the blog.


Since beginning 2018 the world economy, started a downtrend pattern. Even though US market still was not in downtrend, the rest of the world indices were already half a year in downtrend.

For example, EuroStoxx in a monthly chart, which is very informative chart, started to show a downtrend cause, first, the MACD line and signal histogram crosses zero line and becomes negative. Apart from that, in the same chart it can be seen a double top meanwhile the MACD graph does not joins 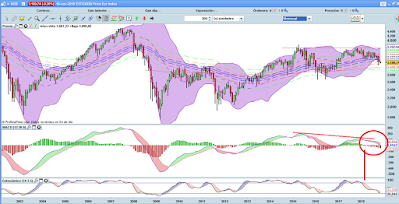 Because of this two technical reasons I was expecting at the beginning of the year a retracement in all financial market (but US still does not started).

Apart from that there are other factors, like the US debt cost is getting higher, interest rates in US are skyrocketing and sooner or later problems should appear.

If we check the US debt interest rate (in 10 year T-Bonds which is the most common T-bond and is a reference for many credit). The 30 year T-bonds is similar to 10-year too.

In US index (SP500) for instance, on the monthly chart still cannot see any downtrend, but in the weekly chart something interesting appears.
Since high from January, the price went up (September was a higher high) but the MACD graph NOT. This is what concerns me more, maybe a BIG downtrend can be starting in US markets in order to equalize the rest of world markets or at least reduce the discrepancies in the world market indices

All this being said, there is political risk with the biggest GDP countries and the trade war, it will increase uncertainty and most probably inflation in US (forcing the FED increase pace). But playing the news is impossible, just have in mind this could happen.

If the world economy pace stops (and with the trade war between US and China could happen) the oil prices will go down a lot, cause stopping oil production will not be imminent, so same pace of oil production will persist meanwhile economy stops. The crude price for instance has fallen since September from 74$ approx the barrel to 56$ the barrel, a 25% down from September highs due to overproduction (or decreasing consumption in economy in my opinion).

So, play conscientiously in this greed market
No comments: