Too much optimism in economy 2020

If we see just the grahps, the different index graphs, we can see there was some turbulence on march but that it has ben recovered fully from it.
However, I don´t think we are actually in the same economy pace as we were before the covid started, however the markets seems that are counting as all economy is at full pace or will be at full pace soon.
To be honest, does not seems we will be at full pace as before covid in 1, 2 or 3 months ahead. Already many discretionary jobs has been lost, most of them are tourism related business that were not able to aford their monthly expenses at went to bankruptcy (it they do not declare bankrupty yet, they could be close to it).
So what`s the real unemployment percentage in U.S. or Europe? Many unemployed people is out of the numbers because of the stimulus checks they are having. How much time, those stimulus can move ahead into the future?
All is counted in the markets as if we will be at maximum pace in few months, any obstacle in the middle, could mve the market down.
November was the biggest increase in many years in one month period on markets, due to central bank help and the covid vaccine optimism.
The real economy effect most probably will emerge when covid phase is finished, central banks move their monthly debt purchases to previous to covid numbers and all the unemployed people is counted as it is. We will be able to see then the real unemployed percentage. Meanwhile, try to estimate it and bet on it.
*Country debt increase
*Central bank debt purchases increase
*Possible country default and external investment risk (stop external investment)
*High Inflation (real inflation) due to stimulus
*Corporate and private debt defaults if economy does not recover at proper pace
1 comment:

Since covid started, mid March, all countries around the world had maximize the debt to GDP ratio, to be able to pay for those stimulus checks, more debt was issued, country debt was generated.
The US 10 year yield was around 1.5% at that time, mid february or so, and it dropped directly to 0.5% after the world has stopped instantly due to covid in march 2020. The yield was moving between 0.6 and 0.5 from march till september, and from that month is going up slowly, having it around 1%.
Why is it going up?
It can be that the world is expecting a high inflation or inflation in goods and services, because of all the money that has been printed or the expansion of the economy that they were forced to execute
I`m thinking also that it is also possible because the central banks started to underload their purchases, and they are buying less, on a slowly pace, in order to keep the yield on the same rate as it was in the covid. If this is the case, when yield goes up, some people, funds and so on, could change from stock market investments to bonds, pressing the stock market drop (but this still does not show up, we had the best november in terms of rentability)
Apart from that, if interest rates goes up, the actual over debted countries will be forced to pay more interest, and will have more difficulties to pay their interest requirements. Perhaps, some country will suffer paying that debt interest, if the interest of all countries move higher.
In Europe, Italy at least has already ask to pardon for the debt generated during the covid. I don´t think the rest of European countries will accept it, but it is alarming that a big european country is asking for it
The USD is lossing power against the rest of the currencies, at least the Euro. It has dropped from around 1.08 to 1.21. So, I don´t know the reason for it, because because if central bank would be buying more debt, I suppose currency would drop as well as interest rates (but thats not the case, so I`m confused).
The SP500 has done well finally in 2020, it is up for more than 10% even though there was a big pandemic in the world.
What could happen in stock market if interest goes up more?
What could happen if some medium country declares debt default?
What could happen if USD strenghtens quickly to 1.08?
What could happen if all the stimulus checks cannot be paid? in United States and all around the globe. European countries has also provide huge stimulus checks to unemployed people due to covid
...
Many uncertainties and many unknowns about the market future trend.
No comments: 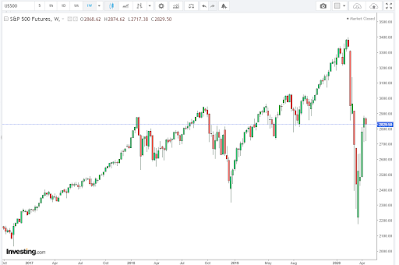 And if inflation kicks on, the savings will be the most affected investments. Inflation normally increases stock market prices, and could say, that being in the stock market while inflation kicks in, could be the best option, because companies use to have better revenues, mainly due to inflation effect, and their stock price increases in similar percentage.
No comments:

So, we could have them as reference, and the future does not seem so critical and dramatic. The dump on European market are more closer to 30% and in US around 25%, but all countries finally have decided to apply same measures as China did, so, we are in the correct path I would say.

Europe and US are controlling people`s free movements to avoid the expansion of the virus and in the same time are using fiscal policies to protect market as much as possible. Even though, it is known that there will be some decline in the production for a while, until all goes to normal. China finally was able to contain  the virus expansion so it is not the end of the world and we have something else on our advantage, the hotter weather is closer than the first time that the virus started in China. So, it could be easier for us to recover.

So, I would say that even though it is hard to decide, it could be a good moment to take some positions on stocks and buy as there are 25% in discount, of course, it will not be a right path to glory, but if you are a medium to large time investor, is not a madness to invest in this moment.